Posted on December 4, 2013 by Stafford Schmool 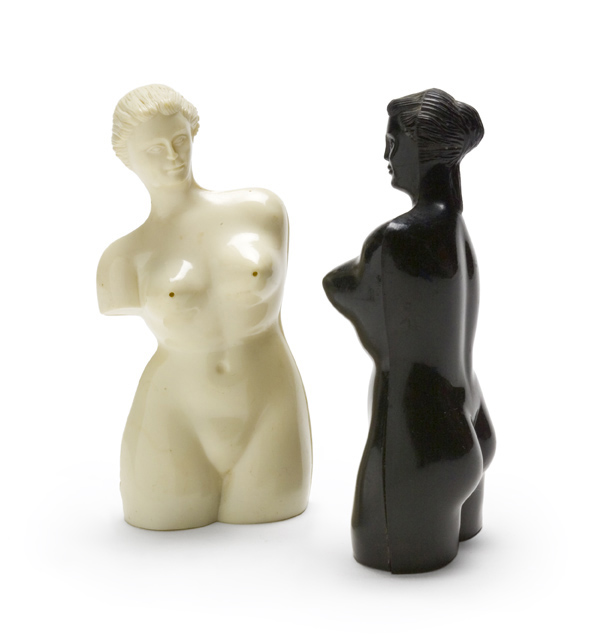 At some point between 100BC and 1820, when she was liberated from the Greek island of Milos by an excited Frenchman, Aphrodite suffered the traumatic loss of both arms. In Chicago, a century or so later, the sculptor of these perky, diminutive facsimiles saw fit to disrobe her and heartlessly amputate both legs.  He also ‘pimped’ her buttocks, waist and breasts, in tune with and in time for the 1950‘s; predicting cosmetic procedures far in advance of their day?

I doubt anyone working at H.Fishlove & Co, “manufacturers since 1914 of novelties that amuse”, awoke mid-slumber with this perfectly absurd vision…. Eureka! Venus? More likely a commercial artist sculpted this cheeky 97mm Venus for fun and Irving Fishlove simply fell in love with her classy kitsch royale ass, and was desperate to find a place for it in his successful catalogue of mirth-inducing tack. The function they found for her, however trite, sets her apart from the regular Fishlove fare, which was generally rendered obsolete within seconds of a 3D ‘punchline’ being delivered. Unfortunately tests with Jimmy the Greek revealed not much salt or pepper exiting her pert nozzels.

We can rest assured that kitsch is generally considered ‘not good’, but what it is, and what it isn’t, can still confuse. I have to thank Tim Parsons for drawing some intelligent and considered lines around the subject, included in his excellent book, Thinking Objects, which is essential reading for designers, students, and anyone interested in contemporary product design.

This entry was posted in tools. Bookmark the permalink.