Posted on October 6, 2013 by Stafford Schmool 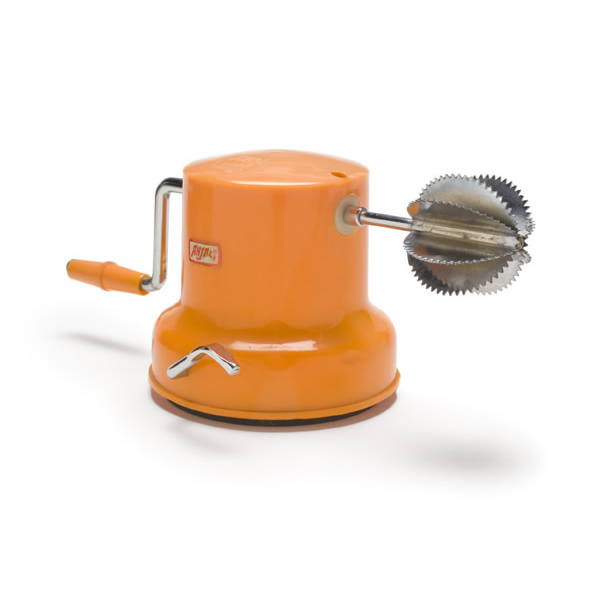 My good friend Hoople* gave me this orange plastic winder/grinder thing way back in 1989. This object marks the time when the odd, mundane or stupid objects I’d accumulated over the years were formally recognised as a ‘collection’ and some criteria were established for any future additions.

This thing looks like a cross between an instrument of torture and a kids toy. Is it a winding machine for wool?….a fondue cheese grinder?….some sort of carpentry device? For some reason I was under the impression Hoople discovered this on an exotic and faraway holiday….although most places seemed exotic and faraway back then. It turned out that he bought it on the Edgware Road, London W2.

It is however an exotic object, and is imported from the Indian subcontinent where it is used to prepare fresh coconut for cooking; curries, chutney and salads etc. FYI – the coconut is not really a true nut, but a Drupe. This contraption arrived in three pieces, and assembled in a satisfying manner like a Day of the Jackal sniper’s rifle. The chromed steel serrated blade slides through nylon bushes set into the orange polypropylene body and screws onto the cranked handle. The base has a rubber suction device on the underside, activated by the small lever/cam, which allows it to be temporarily fixed to your table or worktop, and it has to be said, doesn’t work very well. The leverage required to scrape the flesh away is more than the weak suction can cope with so it pops off and is not much use. It gets a 1 star review on Amazon.

*The Hoople [aka Hoops, Rurval Ervic, Smiler, Ike, Jah Pickles, etc etc] is an enigma, a maverick design guru, and all round gorgeous blue flower. An exceptionally talented goalkeeper, a founding father of the Jelly Corporation, graphic designer, calligrapher, filmmaker, fence-maker – a man with unlimited talents. Among notable record sleeves for Stereolab and Th’ Faith Healers, a personal favourite is his appearance as the cover star on ‘A picture of health EP’ –  his sandals qualify for a special Queer Tools mention here – the toes have been cut out by his mum Jeanne to allow some extra growing room. The corduroy fetishist’s ‘Velvet Stripes’ and other films made with Rob Ryan will surely be available online soon? More recently you may find him ‘turd polishing for big time TV sports events’ like Champions League and London 2012. Big Love to you Hoops x

This entry was posted in tools and tagged orange. Bookmark the permalink.