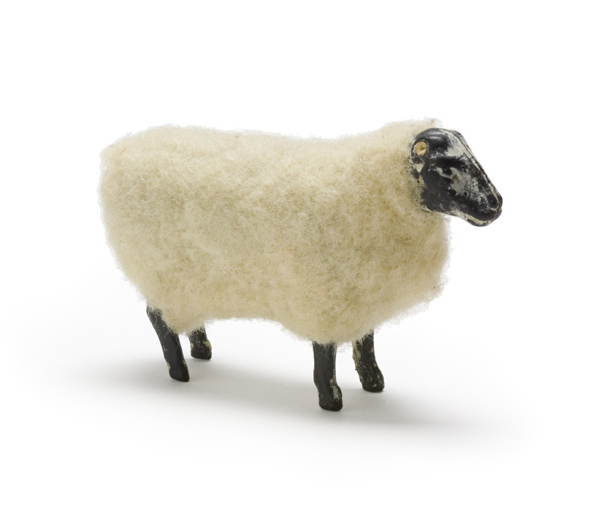 Mary had a little ram, his fleece was white as snow, and everywhere that ought to be warm and woolly, was – thanks to his cosy felted coat procured from an obliging relative. This cute and sustainable concept works particularly well because the fine wool fibres look and feel right at 1:12 scale, seamlessly stitched around his plastic body. How come all toy sheep aren’t made like this? I bought this rare breed twenty years ago in New York at the W25th St flea market, but know little of his history. I’ve seen a few identical sheep since, so I don’t think he’s a one-off. He has seen better days and I suspect he could be 50 years old. His curly horns broke off long ago, and his black face was perhaps once white? This DIY version of the concept could start a Real Woolly Sheep phenomenon.

While thinking about my sheep in sheep’s clothing, another mini created from ‘parent’ material came to mind. How many millions of elephant shaped trinkets have been carved over the years from the tusks of murdered donors? I had presumed this was a thing of the past, but the shocking and depressing statistics of the current illegal ivory trade tell another story. Tusk estimates up to 35,000 elephants were brutally killed last year for their ivory. China is generally blamed for supporting today’s market, but we should remember these figures were probably 100 times higher 100 years ago when ivory was used as thoughtlessly as we use plastic today. At the turn of the 19th century over half a million ivory keyed pianos were produced each year across Europe and the USA. The burden of shame will sit with us for many years to come.

Posted in tools | Comments Off on QT 004